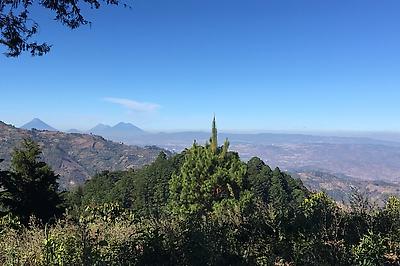 The name of the El Tambor farm in Palencia, Guatemala has an interesting origin: many years ago the locals in the area would hear a faint thumping sound like a drum-beat during the rainy season, which was assumed to be noise from an underground waterfall. The noise mysteriously ceased shortly after WWII, but the name for the area has remained. The Calderon family purchased the farm in 2001, moving from a different area where they had previously been farming at a lower elevation. Since then, they've been making the most of El Tambor's prime coffee-growing location, with several Cup of Excellence awards spanning 2007 to 2018.

This lot of Red Bourbon, Caturra, and Pache varietals has been gently decaffeinated using a Swiss Water Process that leaves the coffee bursting with unique flavor. We're picking up on a smooth cocoa note combined with a hint of orange zest and sticky-sweet plum. Vibrant decaf coffees are hard to come by, and we're grateful to see excellent producers like the Calderons keeping the quality and complexity high for the decaf-drinkers of the world. Enjoy!

You must have received this item in order to comment.

A heckin’ solid cup of coffee

Glad you liked it! Whenever we find a decaf this tasty we get really excited.

Smooth mellow blend. Much better than expected for decaf

I liked this one a lot. I brew in v60 and many times I need a splash of milk for everyday drinking. This one was great by itself, especially for iced coffee. Delish)

I needed to switch to decaf and was pleasantly surprised by how great it tastes!